‘Development is tough and getting it right, whether social, economic, housing or green, is not easy. Partnership is a way to improve the process and the result.’ Andrew Boraine, CEO, Western Cape Economic Development Partnership

Economic development is complex and it is seldom that one organisation or part of society has all the resources or ideas necessary to solve persistent problems that require going beyond ‘business as usual’.  Solving such problems requires us to understand who has a role to play in working towards solutions. Partnership in economic development is not just about mobilising resources to address the problems; it is about juxtaposing different ideas and going beyond the normal consultation process in order to co-create and co-implement a solution. Partnership in this area builds high levels of accountability and moves away from paternalistic models that want to keep government out and privatise the process. It goes beyond the binary thinking mode of either one or the other, whether that be public or private, public or civil society, private or civil society.

Partnership is about co-design and co-ownership of solutions. It steers a path between any one organisation’s preconceived notions of the problem and its solutions. In complex situations, such as in a developmental state, partnerships should be thought of as a prerequisite for success.

What kinds of partnerships?

How to establish a partnership?

A partnership is only as strong as its partners and it mustn’t take over the mandate of the partners. Its role is to help the partners to deliver on their own mandates but in a collaborative way. Something is wrong if the partnership starts substituting a partner, so it is key to:

Partners will have different and often competing interests, and it is vital to identify all shared values. A shared value could even be just to say ‘we agree to work together even if we differ.’ Ask the question, ‘what do we have in common despite our surface differences?’

The partnership design process involves the same principles used when designing a product or a system. Specifically:

By Andrew Boraine, EDP CEO
‘For partnerships to flourish, they must create spaces: space in which partners can connect, collaborate and ultimately create solutions.’ Andrew Boraine

The multiple challenges facing Cape Town are complex, persistent, deep-rooted and, sometimes, seemingly intractable. Which types of organisations therefore are best positioned to lead the city in dealing with such complexity?

Government organisations have the statutory mandate and possess many of the resources, but are not always sufficiently in touch with the fine-grained grassroots community issues, or the business and investment environment. In practice, they are often hamstrung with vexed inter-governmental relations and the current anti-development regulatory regime.

Civil society organisations are usually powerful advocates of the rights and needs of specific constituencies and sectors, but often lack both the resources and the strategic capacity to translate mobilisation into effective delivery.

Private-sector organisations are keen to be involved and often have resources, but can be out of touch with the complexities of community needs and the need for structural economic transformation. Business (and government) is often locked into a ‘race to the bottom’ stand-off with labour, given the intractability of our current industrial relations regime.

No one organisation can, on its own, hope to successfully resolve the structural problems of unemployment, inequality and poverty, or address the need for basic services and shelter in informal settlements, or the challenges faced by communities wracked by gang violence and drugs.

Faced by these types of issues and many more, there is a need to harness the collective wisdom, skills and resources for city development. Sounds obvious? Given the historical divisions and high levels of inequality in our city, it is not as easy in practice.

In some cities, cross-sector partnerships are becoming increasingly popular in areas of policy making and implementation that were previously the primary domain of the state. Partnerships, it is argued, can be seen as a “new model of governance”.

Professor Ralph Hamann of the UCT Graduate School of Business, who has studied a wide range of partnership initiatives globally and locally, argues that: “Cross-sector partnerships involve some form of structured collaboration between organisations from business, government and civil society on the basis of converging interests, focused on achieving joint objectives. Partnerships exist on different scales and take different forms, but they have in common the expectation that the participants can achieve their objectives more effectively and efficiently through strategic alliances with others rather than acting independently.”

Hamann further argues that “there is a compelling argument that cross-sector partnerships are strategically placed to lead urban transformation because of their ability to creatively juxtapose different and even conflicting interests, objectives and organisational cultures. Sometimes, the explicit embrace of tensions between partners or between perspectives acts as a catalytic force to identify creative ‘win-win’ options”.

We can identify two types of partnership, namely implementation partnerships (predominately about financing and managing action to achieve particular, tangible objectives), and innovation and dialogue partnerships (which commonly seek to create a guiding or facilitative framework for action).

There are four simple lessons that can be drawn from the experiences of the Cape Town Partnership, a hybrid model of partnership, and its constituent partners over the past 15 years:

Lesson One: A partnership is only as strong as the partners

A cross-sector partnership does not substitute for or compete with its constituent partners. As important as being able to engage directly in provision of value-add services is being able to hold partners accountable for delivering on their own mandates. This is why roles and responsibilities within a partnership need to be clearly defined. Part of the work of a partnership is to build the capacity of the partners.

There is a need to constantly renew partnerships, and not to take them for granted. Within most partnerships “is the need to build and maintain trust between participants in a partnership… because partners will need to take risks when relying on other partners fulfilling their part of explicit agreements or implicit expectations” (Hamann).
Within a commitment to common objectives and a shared style of work, there needs to be room for differences. A partnership won’t work if you try and force all partners to think and act the same.

Lesson Three: Get the ‘right’ people

In effective partnerships, “decision-making power is not held or exerted primarily by organisational hierarchy, state mandate or market competition, but rather on the basis of legitimacy brought about by the ‘right’ people being involved in authentic and solutions-orientated dialogue” (Hamann). This is the opposite of the ‘command and control’ or compliance-based accounting approaches that are prevalent.

Cross–sector partnerships have a varied lifecycle, and need to constantly adapt to changing circumstances. They therefore need to be flexible and light, to have ability to amend or expand the original mandate, and to take on new partners.

It was on the basis of these lessons that the Economic Development Partnership rather than a statutory agency was established in the Western Cape, to lead a common economic growth, development inclusion agenda for the region.

‘Faster and more inclusive growth calls for greater cooperation and better alignment between labour, business, government and other actors to get things done – hearing each other out, finding solutions, encouraging innovation, building a ‘smart’ South Africa.’

For a partnership to work, we have to learn to “leave our jackets at the door”, i.e. to temporarily suspend those identities that lock us into negative attitudes, habits and behaviours and find our common ground and purpose.

The role of collaborative intermediary organisations

The role of collaborative intermediary organisations

Transitions are structural systemic changes resulting from interacting cultural, economic, technological, behavioral, ecological and institutional developments at multiple levels. A transition path is a strategy to work towards a shared future ambition with a number of milestones along the way. Typical transition challenges include:

Societies face persistent problems that cannot be solved by traditional approaches alone. Societal change is a highly complex and non-linear process at multiple scale levels. Transition management consists of a deliberate attempt to stimulate a transition towards a more desirable future. However, transitions are the result of the interplay of many unlike processes, several of which are beyond the scope of management, such as cultural change. Transitions therefore cannot be ‘managed’ in a traditional sense. We can influence the direction and speed of a transition through various types of steering and coordination. Thus, transitions defy control but they can be influenced.

The implementation of transition management is dependent on factors such as creativity, perseverance and communications skills, rather than technocratic planning.

Transition management uses the power of both markets and planning, and is engaged with the establishment of new as well as the change of old institutions

Transition management is based on a two-pronged strategy. It is oriented towards both system improvement (improvement of an existing trajectory) and system innovation (representing a new trajectory of development or transformation).

Transition management breaks with the old planning-and-implementation model aimed at achieving particular outcomes. It is based on a different, more process-orientated, partnering and goal-seeking approach which helps deal with complexity and uncertainty in a constructive way.

Why take a partnership approach?

The Cape Town Partnership is a good example of a hybrid model. On the one hand, the CCID focuses on the ‘here and now’. Its strength is its attention to detail, and its ability to provide immediate responses to urban management problems and have a visible presence on the streets. In other words, implementation.

On the other hand, the Partnership concentrates on ‘what happens tomorrow’. It focuses on the broader socio-economic context, brings diverse partners (and points of view) together, and is able to initiate new ideas and longer-term programmes. In other words, an innovation and dialogue partnership, focusing on strategic initiatives. Similarly, the EDP attempts to combine vision and action in one.

Within a commitment to common objectives and a shared style of work, there needs to be room for differences. A partnership won’t work if you try and force all partners to think and act the same. Trust needs to be built over a period of time, through openness, transparency and knowledge-sharing, as well as being able to understand the diverse work styles and organisational cultures of the partners.

How does one begin to overcome these various types and levels of mistrust? The authors Covey and Brown use the term ‘critical cooperation’ to describe partnerships that are based on learning how to manage not just cooperation or conflict, but cooperation and conflict in the same relationship. 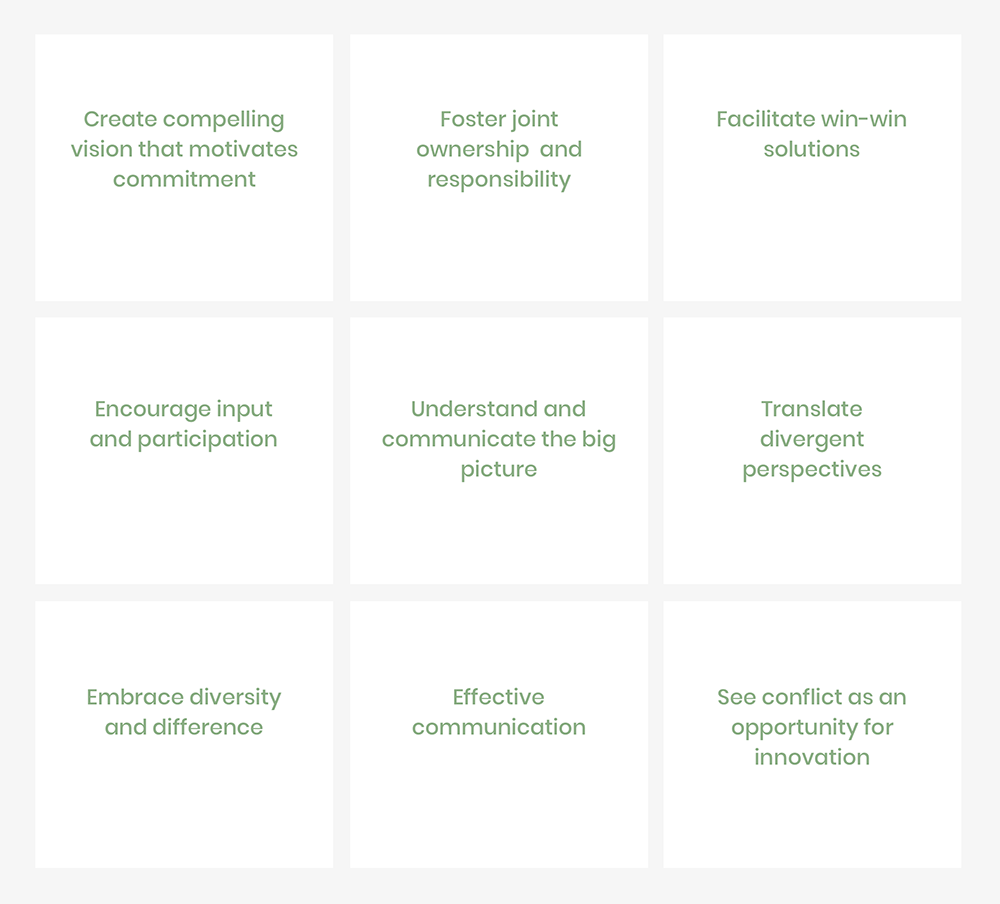 In effective partnerships, decision-making power is not held or exerted primarily by organisational hierarchy, state mandate or market competition, but rather on the basis of legitimacy brought about by the ‘right’ people being involved in authentic and solutions-orientated dialogue.

In conclusion, technical and academic qualifications matter less, and competencies of collaborative leadership matter more, if you want to find the ‘right’ people to organise and lead partnership organisations, and the partners that are part of the partnership.